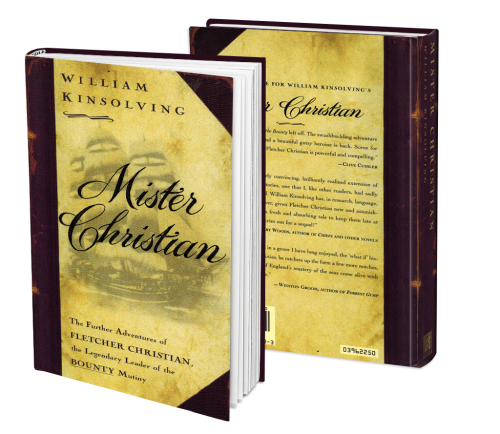 The Further Adventures of FLETCHER CHRISTIAN, the Legendary Leader of the BOUNTY Mutiny

‘”What a wonderful book! All that history, all that love and anguish on the high seas, all the poets and pirates and explorers in warfare, … a truly compelling story, dazzlingly told.” — Gay Talese

“In MISTER CHRISTIAN, Kinsolving ratchets up the historical novel, making that elegant era of England’s mastery of the seas come alive.” — Winston Groom

The bestselling author of Bred to Win and Born with the Century thrusts Bounty mutiny leader Fletcher Christian into a rousing and exhilarating tale of high adventure, romance, and treachery at sea.

On April 28, 1789, Fletcher Christian led a mutiny aboard HMS BOUNTY and forced Capt. William Bligh and eighteen men overboard. History tells us that the mutineers settled on Pitcairn Island in the South Pacific where their idyll came to a violent end in a native uprising. But there are numerous historical incidents suggesting that Christian was not killed and managed to escape. In Kinsolving’s novel, Christian does escape, and subsequently frees a beautiful young Englishwoman, Daphne, from debauched privateers. Together they reach a deserted island where they fall deeply in love – a love that sustains them both through the worst of times that follow.

“What if the cure for madness is simply to believe the mad?” the doctor asked himself. “Whom should I trust to tell me of the world’s sad truths, my patients — poor King George at Windsor Castle and the one claiming to be the arch-mutineer Fletcher Christian in Bedlam, … or Bonaparte and Wellington?”

“I am Fletcher Christian.” If their names — William, Dorothy Wordsworth — had shocked me, mine blasted them.
“I remember you from school!” Wordsworth managed. “I was six years behind you.”
“Your brother was our barrister against Sir Jamie Lowther, he won for us in court,” Dorothy added.
Wordsworth said, “Your father and ours were…”
“Our families are as intertwined as a shroud-laid rope,” I said. “I’m a fugitive. I couldn’t let you speculate about me…”
“But you couldn’t kill us, either,” Dorothy said, “so you may stay for supper.”