Born in Brooklyn, Kinsolving admits that he was only there for two days while his mother recovered from the experience, and that neither he nor she ever went back. At the time, they lived in Garden City on Long Island from where she had been rushing to a Manhattan hospital. The little tyke being insistent, they didn’t make it.

From first consciousness, Kinsolving witnessed the basic elements of dramatic presentation in a progression of churches. His father was one of eleven clergymen in the family over three generations — five of whom were bishops — who served in the Episcopal sect. This calling necessitated a lot of relocation, in William’s case, from Garden City to Pittsburgh and finally to Phoenix where his father was installed as another bishop in the family. It was here that William attracted the terribly amusing sobriquet: “You son-of-a-bishop!”

Sent away to a boarding school that offered a break on tuition to missionaries (Arizona being a mission at the time), and where a lot of Kinsolving sons had attended, William headed to the then all-male Episcopal High School in Alexandria, Virginia. The absence of the opposite sex during these formative adolescent years is a lack from which Kinsolving never recovered, and for which he has overcompensated ever since.

The school was a thoroughly southern and racist institution, and he was the subject to constant suspicion. His classmates were not sure if Arizona was Yankee or Confederate, that war’s constant deconstruction superseding any concern they might have had about the two world wars that followed it. Upon barely graduating, Kinsolving left The South and went as far away as possible to college.

After a questionable academic career at Stanford (How practical is a double major in Drama and Far Eastern Theology?), Kinsolving fled to the Oregon Shakespeare Festival to play RICHARD II.

He then attended The London Academy of Music and Dramatic Art (LAMDA) for polish. Returning to New York, he appeared as an actor under-, off- and on Broadway, as well as a saloon singer in smoky Greenwich Village nightclubs.

For creative diversion during these years, he directed productions back in Oregon, at the Stratford (CT) Shakespeare Theater, Harvard, Dartmouth, Café La Mama, then went out to California to act again in Shakespeare at the Old Globe, and won the Best Actor of the Year award from the San Francisco Chronicle for performing at the Berkeley Rep.

While appearing in a dreadful Broadway vehicle for the great movie star Claudette Colbert, Kinsolving realized a growing doubt about acting as a career. The deadening effect on the creative excitement of performance done repetitively eight times a week for months on end had its way with him. In the case of Ms. Colbert’s lumbering vehicle, so many female fans wanted to see what she still looked like that the play just kept running and running. In her 80’s, she looked fantastic. Backstage during the run, Kinsolving started to write for sanity’s sake. 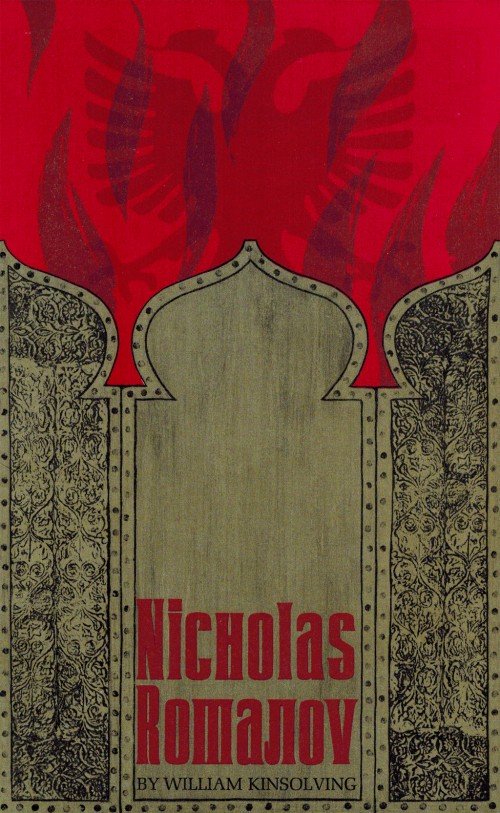 It turned out to be his first play, an opus called NICHOLAS ROMANOV, with 83 speaking roles and calling for a male a cappella chorus. Writing it with no thought of production, Kinsolving put in everything about the last tsar that he knew. As luck would have it, a director who was going through “my Russian phase” read it and was enthralled. Out of the blue, Kinsolving was awarded a Ford Foundation Playwriting Grant, and the play was produced by the Stratford Ontario Shakespeare Festival.

The production employed every Canadian actor south of the Arctic Circle, including the late great William Hutt as the Tsar, the stunning Franny Hyland as the Tsarina, and the charismatic Leo Ciceri as Rasputin. Plus the Saskatchuan Male Chorus! It resulted in, as one critic opined, “… a very interesting exercise in on-stage crowd control.” Bread riots! Cossack sabre charges! Firing squads!

As a result, the play led to the first of some 54 screenplays on which Kinsolving worked for every major studio (and several distinctly minor ones), in Los Angeles, London and Rome (ask him about Zeffirelli sometime). He started by writing his own screenplays (among them, adapting Fred Exley’s great American novel A FAN’S NOTES for Warner Brothers), but soon discovered the basic Hollywood rubric: Everyone and his mother, lover, and pool-cleaner is allowed to rewrite screenplays, based on reasoning that would mystify God. Therefore Kinsolving moved adroitly to become a script doctor, the last person to rewrite. A couple of four-hour mini-series for the networks were generated, as well as his gathering enough behind-the-scenes gossip and scandal with which to regale dinner parties for the rest of his life.

Suspecting that such a routine was leading to the utter corruption of his soul (not to dare mention his body), Kinsolving pitched an idea for a film to (then) Twentieth-Century-Fox for whom he’d worked on fixing a number of scripts. When they bought the pitch, he urged them to let him write it first as a novel, following that with the screenplay. Astoundingly, they agreed, and Kinsolving retreated to Carmel to write the first of his novels, BORN WITH THE CENTURY. To Fox’s stunned surprise and Kinsolving’s apoplectic joy, it became a best seller. Subsequently as he was writing the screenplay, a bitchy but Hollywood-vicious corporate takeover of the studio occurred. The film was never made, but the book allowed Kinsolving a graceful departure from the sun-soaked madness of Southern California.

While serving on the Board of Trustees of the California Institute of the Arts (CALARTS), he had met and been smart enough to marry Susan née Baumann now Kinsolving, the poet. She then presented him with two astonishing daughters, and presently puts up with him in Connecticut. Quixotically between writing books and plays, he joined the Board of Directors of both The Actors’ Company, as well as a California biotech corporation.

When time permits, he has regressed happily to saloon singing and fundraising performances, accompanied by the likes of Peter Duchin and Emmanuel Ax, singing at the Algonquin Hotel’s late lamented Oak Room and for one of the late Brooke Astor’s better birthday parties, among many other less name-dropping venues.

A sixth novel, HOW QUICK THE SUNRISE, is out to publishers. Set in ante-bellum America, it’s the first of a trilogy featuring three brothers and an extraordinary woman. The second book (research has begun) will cover the Civil War itself but from unfamiliar perspectives (think: Cuba and Mexico); the third is about Reconstruction from one-off points-of-view.

Another novel, THE RHINELANDER AFFAIR, is just ready for submission. The trial of Leonard Rhinelander v. Alice Jones Rhinelander took place in Westchester County Supreme Court in White Plains, New York during the month of November, 1925. It was the most explosive and infamous trial of the decade. A unique love story, the book describes an America of corrosive extremes from which the couple fights to escape.

Five new plays are in “development exhilaration.” One, FORGERY!is based on the infamous Shakespeare counterfeits that captivated London in 1796. It’s has had staged reading at Washington D.C.’s Shakespeare Theater, another at New York’s Shakespeare Society, and finally at Shakespeare and Company in Lenox, Mass. Another, SINGLE, is a romantic comedy set in the Napa Valley wine country that examines the many variations of its title. The third, THEATRE FARCE, is a crazed play-within-THE TAMING OF THE SHREW by a theatre company struggling with both catastrophe and a conflicted movie star playing Kate. A two-hander with no sets, WORD PLAY, as much about language as the vicissitudes of love was presented at the Unicorn Theater in Stockbridge in the summer of 2015. And finally, AMERICA & ME, a one-man play of Walt Whitman celebrating his 67th birthday, that at the moment I’m performing all over the country.

Stay tuned, and see more about all these projects on the website’s pages.